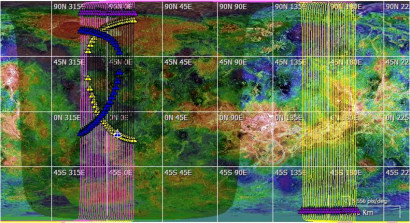 This figure shows coverage of Venus by orbital tracks during the reporting period from 16 September to 13 October 2012 (Medium Term Plan (MTP) #84). The orbit sequence to the right shows the ascending branch. The position of terminator, Earth and Sun correspond to the last orbit of this MTP. Purple triangles along the top are pericentre locations (on right, at the top of the descending branch) and along the bottom are apocentre locations (on left, at the bottom of the descending node). In the ascending branch, yellow triangles denote start and end of solar eclipse; blue triangles denote beginning and end of Earth occultations.

During this period, Venus Express flew over Maxwell Montes (65.2°N, 3.3°E) between 26 September and 6 October (orbits 2350 to 2360). Other surface targets included Sif Mons (21°N, 8°W) and Gula Mons (22°S, 1°W) in Western Eistla Regio, which has been suggested to cover an active mantle plume. In the southern hemisphere, an important target is Innini Mons (34.7°S, 31.7°W) in Dione Regio, which has been identified as a recently active volcano. It has been estimated that the flows are possibly as geologically recent as 2.5 million years.