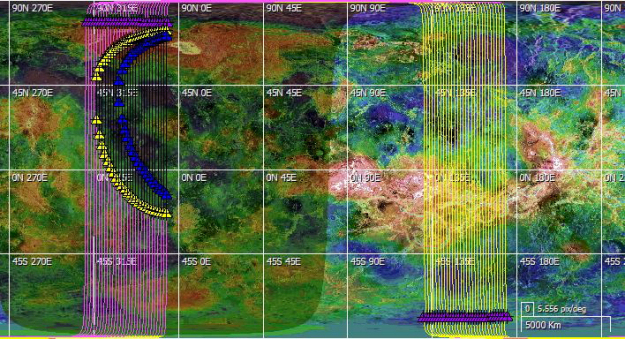 This figure shows coverage of Venus by orbital tracks during the reporting period from 28 April to 25 May 2013 (medium term plan (MTP) 92).

The sequence of lines to the left shows the ascending branches of the orbits. The sequence of lines to the right shows the descending branches. The purple colour indicates that the spacecraft is in darkness; the yellow colour indicates that the spacecraft is in sunlight. The position of the terminator - the dividing line between the day and night sides of the planet - corresponds to the last orbit of this MTP. Purple triangles along the top are the pericentre locations (on left, at the top of the ascending branches) and along the bottom are the apocentre locations (on right, at the bottom of the descending branches). Yellow triangles (if present) denote start and end of solar eclipses; blue triangles (if present) denote beginning and end of Earth occultations.

While the spacecraft is in the shadow of the planet during solar eclipses, the Venus Monitoring Camera (VMC) can make use of an infrared 'window' in the clouds to obtain low resolution images of the surface. Ishtar Terra, W. Eistla Regio, and Dione Regio in the southern hemisphere were accessible for observations during this MTP. However, due to a focus on surface observations during the last eclipse season, nightside observations of Nitrogen Oxide were prioritised during this reporting period.