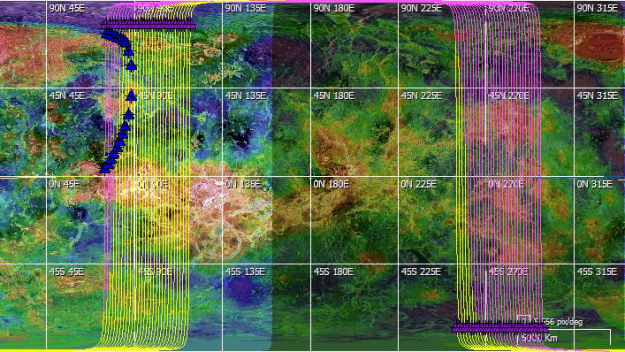 This figure shows coverage of Venus by orbital tracks during the reporting period from 21 July to 17 August 2013, medium term plan (MTP) 95.

The sequence of lines to the left shows the ascending branches of the orbits. The sequence of lines to the right shows the descending branches. The purple colour indicates that the spacecraft is in darkness; the yellow colour indicates that the spacecraft is in sunlight. The position of terminator- the dividing line between the day and night sides of the planet - corresponds to the last orbit of this MTP. Purple triangles along the top are pericentre locations (on left, at the top of the ascending branch) and along the bottom are apocentre locations (on right, at the bottom of the descending node). Yellow triangles (if present) denote start and end of solar eclipse; blue triangles (if present) denote beginning and end of Earth occultations.

After the end of the twelfth Atmospheric Drag Experiment (ADE) campaign on 27 July, sulphur dioxide (SO2) measurements became a scientific priority for Venus Express and will remain a priority for the next four months. For this reason, day-side SO2 nadir observations were performed as often as possible beginning 30 July. These were preceded by Venus Monitoring Camera (VMC) cloud-tracking observations whenever possible. Occultation observations were carried out with the Venus Radio science instrument (VeRa) during two suitable orbits at the end of the twelfth ADE campaign and before the start of the SO2 observation campaign, on 28 and 29 July.