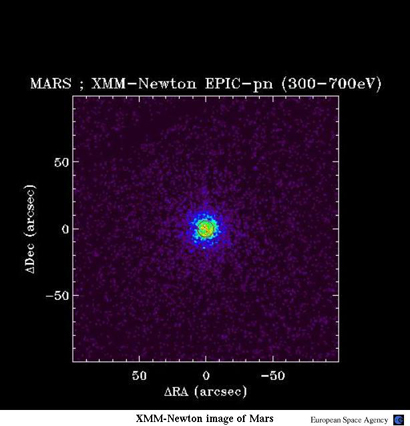 Many Solar System objects are known to emit X-rays. Soft X-ray emission (0.1-2 keV) has been detected from the Sun, from 5 planets (Venus, Earth, Mars, Jupiter and Saturn), several satellites of planets, and active comets. A number of mechanisms are responsible, among them charge exchange and fluorescence. The former occurs when an ionized atom collides with a neutral atom or molecule and captures an electron into an excited state which upon decaying emits an X-ray at a characteristic wavelength; the latter arises when X-rays from the Sun hit atoms of elements such as oxygen in the atmosphere of the planet, and this radiation is re-emitted at a characteristic wavelength which identifies those specific elements.

Observations of planets with XMM-Newton are rare. In the past decade Mars has been observed once, Jupiter twice and Saturn three times. High-resolution X-ray spectroscopy with XMM-Newton confirmed that the X-ray emission from Mars is composed of two different components: one due to fluorescent scattering of solar X-rays in its upper atmosphere and the other one due to solar wind charge exchange in its exosphere. This was the first definite detection of charge exchange induced X-ray emission from the exosphere of a planet other than Earth.