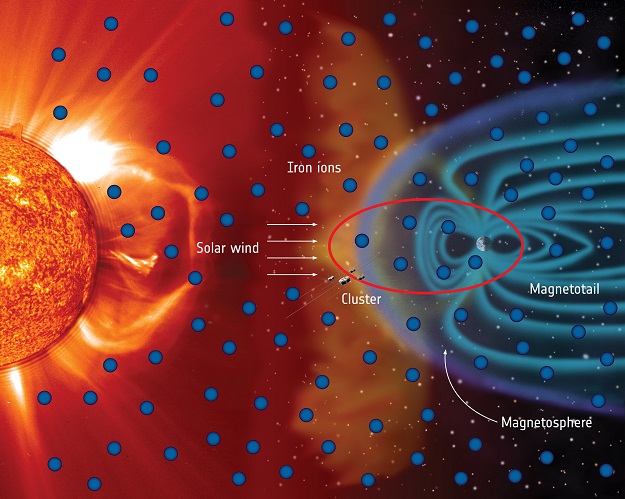 An illustration of the Sun (on the left) and the solar wind, a constant flow of charged particles – electrons, which have negative charge, and positively charged ions – that permeates the Solar System and impacts on Earth's magnetic environment (on the right).

A study based on 18 years of data from ESA's Cluster spacecraft (also shown in the illustration) revealed that iron, an important ion thought to be relatively rare near Earth, is present everywhere in our planet's vicinity, albeit in tiny amounts. The new study found iron ions (represented here as blue spheres) both in the so-called 'geospace' – the region of outer space near Earth, including the upper atmosphere and magnetosphere – and in the near-Earth solar wind. This suggests that iron in geospace originates from the solar wind rather than from the lower layers of our planet's atmosphere.

Simulation of Earth's foreshock during a solar storm