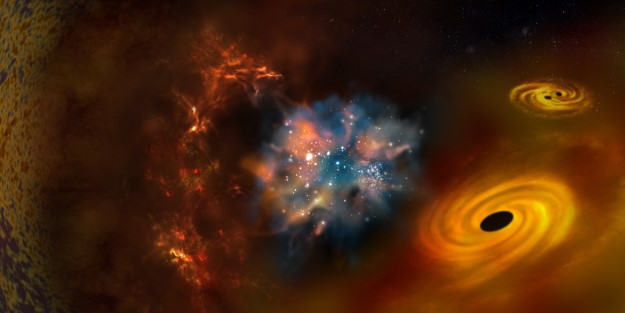 This artist's impression depicts aspects of the early Universe that can be investigated using probes such as gravitational waves, or high-precision spectroscopy to study the relic radiation from the Big Bang.

'New Physical Probes of the Early Universe' is one of the science themes for the Large-class missions in ESA's Voyage 2050 plan.

These are outstanding questions in fundamental physics and astrophysics, and we now have ‘messengers' that can address them. One is gravitational waves, which offer an entirely new and unobstructed view of the early Universe, because they travel through space unimpeded by scattering or absorption. Another is high-precision spectroscopy of the light of the fireball Universe, the cosmic microwave background radiation.

Both of these topics would open up a new discovery space, throwing light on many of the dramatic events that occurred during the early Universe. This theme follows the breakthrough science from Planck and the expected scientific return from LISA.

From Temperate Exoplanets to the Milky Way