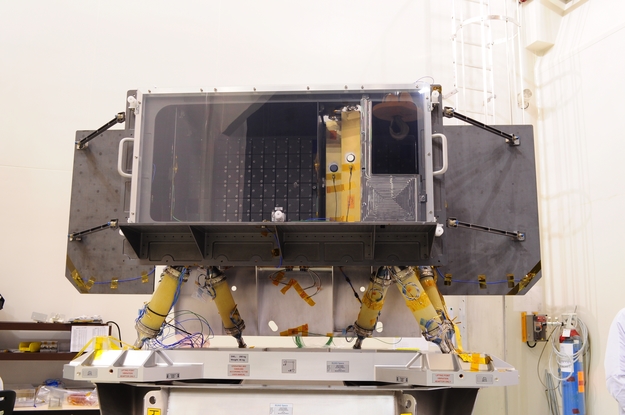 This photograph shows the front view of the Gaia focal plane assembly (FPA) structural model (SM) in the cleanroom at INTESPACE, Toulouse, France.

In October 2010, the FPA SM underwent a series of mechanical tests that demonstrated that it is structurally fit for flight.

In the photograph, the black panels are radiators, used for passive cooling of the focal plane CCDs. The focal plane is inside the approximately 1-metre-wide box-shaped radiator, and behind a clear protective cover placed at the front of that radiator.

The silver-coloured panel (visible behind the FPA) is used for passive cooling of the FPA electronics that are also housed behind the FPA.

The six yellow 'tubes' underneath the FPA are the FPA support struts that are used to mount the FPA on the Gaia torus.