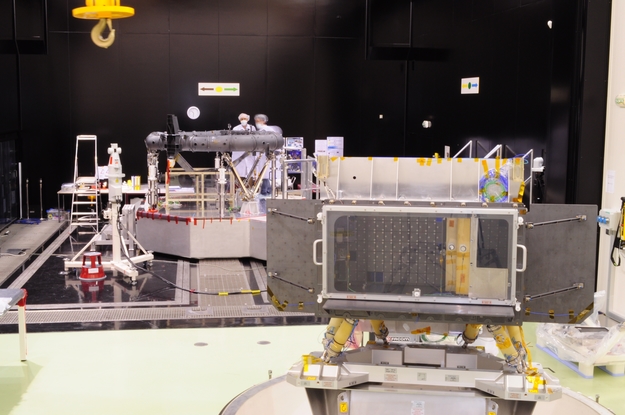 This photograph shows the structural model (SM) of the Gaia focal plane assembly (FPA) in the foreground and the flight model of the Gaia torus in the background, in the cleanroom at Astrium, Toulouse.

This front view of the FPA shows the focal plane itself (which is about 1m × 0.5 m), surrounded by the black, box-shaped, radiator, with two more black radiator wings on either side. The radiators are used for passive cooling of the focal plane CCDs. A clear protective cover is in place on the front of the box-shaped radiator.

The six yellow 'tubes' underneath the FPA are the FPA support struts used to mount the FPA on the Gaia torus.

The 3-metre diameter flight model (FM) of the Gaia torus is a key structural element that will support the two Gaia telescopes and the FPA.