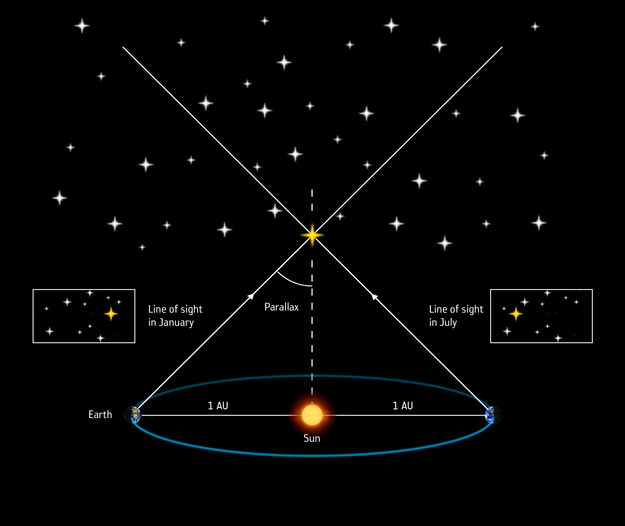 As Earth orbits the Sun, we see an apparent shift in the positions of stars. Known as parallax, this movement is larger for nearby stars and smaller for more distant stars.

Measurements of these stellar movements can be used to determine the distances to the stars. The baseline used for the triangulation is fixed by the size of Earth's orbit around the Sun: the average Earth–Sun distance, or Astronomical Unit (AU), is 149 597 870 700 m.

This illustration shows the shift in a star's position with respect to the distant stellar background between two observations that are separated by six months – for example, the first one in January and the second one in July. The extent of the parallax has been exaggerated for illustration purposes.

Even for the stars that are closest to Earth, the annual shift due to parallax is extremely small, requiring high-precision instruments. The first stellar parallaxes, for a handful of stars, were measured by Friedrich Bessel, Wilhelm Struve and Thomas Henderson in the late 1830s. In more recent times, parallaxes for over 100 000 stars have been measured, and ESA's Gaia mission will measure them for more than a billion stars.
20-Jan-2021 03:59 UT