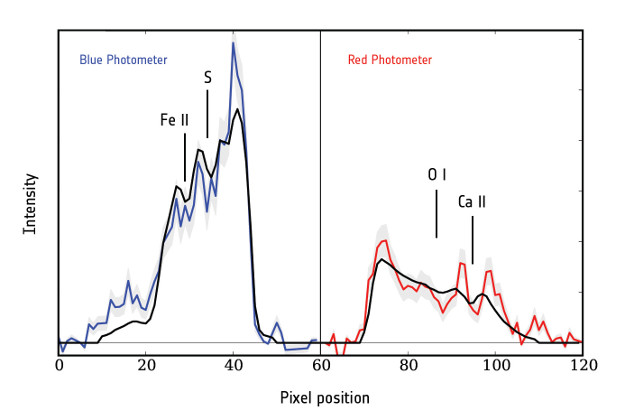 Low-resolution spectrum obtained with the photometric instrument on Gaia of a stellar explosion, or supernova.

Astronomers using Gaia discovered that a source had significantly brightened up between two consecutive observations, performed on 31 July 2014 and 30 August 2014, respectively. The boost in brightness was caused by a supernova, which was named Gaia14aaa. This is the first supernova discovered with Gaia.

The photometric instrument splits the light of an astronomical source to create a spectrum. In fact, Gaia uses two prisms spanning red and blue wavelength regions to produce a low-resolution spectrum that allows astronomers to seek signatures of the various chemical elements present in the source of that light.

Light from the blue photometer is shown in the left half of the graph, and that from the red photometer in the right half. On the horizontal axis, the position of pixels in each of the two photometers is indicated. The pixel position provides a rough indication of the wavelength, with the blue photometer receiving light with shorter wavelengths (330–680 nanometres), and the red photometer with longer wavelengths (640–1050 nanometres). On the vertical axis, the intensity of light registered at each pixel is indicated. The gap at the centre of the graph is an instrumental effect.

This low-resolution spectrum contains hints about the nature of this transient source. The blue part of the spectrum appears significantly brighter than the red one, as expected from a supernova of Type Ia – the explosion of a white dwarf caused by the accretion of matter from a companion star in a binary system. The presence of absorption lines from iron, sulphur, oxygen and calcium (indicated in the graph) is also in line with the elements expected from a Type Ia supernova. The black curve shows the spectrum of a Type-Ia supernova as predicted by current models for a supernova at the same distance (about 500 million light-years) two days after the peak of its luminosity at visible wavelengths.

The astronomers followed up this source with the Isaac Newton Telescope on La Palma, in the Canary Islands, Spain, obtaining a high-resolution spectrum. This not only confirmed that the explosion corresponds to a Type Ia supernova, but also provided an estimate of its distance, proving that it actually happened in the galaxy where it was observed.