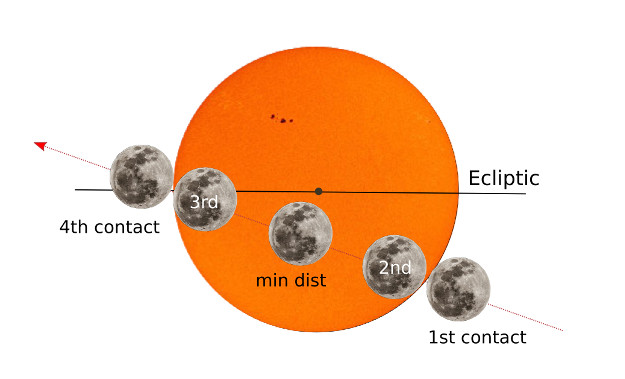 On 6 November 2015, a near perfect alignment between Gaia, the Moon and the Sun will enable the star mapping spacecraft to witness a lunar transit across the Sun.

Transits occur when planets (or moons) move in front of a nearby star. Such events occur occasionally in our Solar System when we see Venus and Mercury pass across the Sun’s brilliant disc. As the small worlds drift across the illuminated stellar disc they appear as dark dots or circles. They also block some of the light and heat emitted by the star.

This figure illustrates the difference stages of a transit.

The transit starts at 08:18 UTC (GMT) with the first contact (outer contact) between the disc of the Moon and that of the Sun. The solar flux will gradually decrease for about 2 hours, until the Moon’s entire disc is visible in front of the Sun. Over the next 6 hours the levels of incoming solar radiation will remain steady until the third contact. During the next two hours the Moon will move away from the solar disc and the event will end at 18:35 UTC.