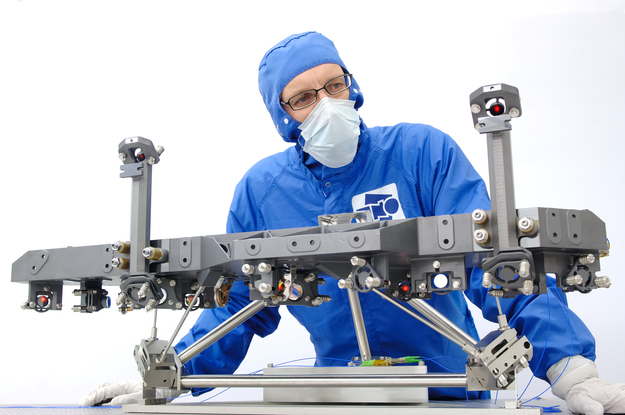 The Basic Angle Monitor (BAM) consists of two bars that are mounted on the Gaia payload torus via isostatic mounts; one being positioned opposite each of the two main telescope mirrors.

Each bar comprises a structure supporting the 22 beam-folding mirrors and, on bar #2 (shown here), the light source, collimating optics and beam splitters.

The structural components and the folding mirrors are manufactured from sintered silicon carbide; the transmissive optical elements are made of fused silica. Bar #2 is about 923 mm in length and weighs 9 kg; bar #1 is 790 mm and weighs 7.1 kg.

A laser diode on bar #2 acts as a point source; the collimated light from this point source is used to generate four beams. Two of these beams are sent to the telescope mirror opposite bar #2, while the other two are sent towards bar #1. The pathlength difference between one pair is less than 10 micrometres and the beams are parallel to within 30 microradians.

The Netherlands Organisation for Applied Scientific Research, TNO, was responsible for the development and manufacture of the Basic Angle Monitor.