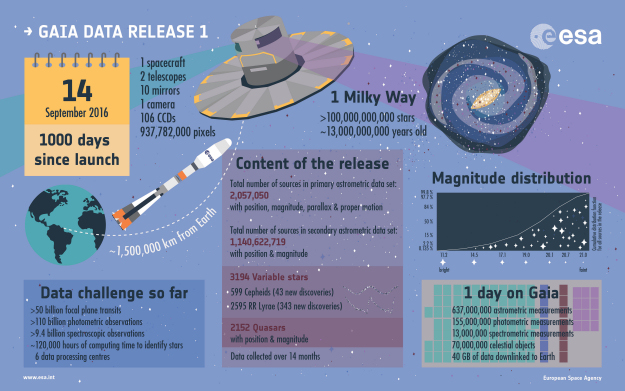 Gaia is ESA's mission to compile the most detailed three-dimensional map ever made of our Milky Way galaxy, charting one billion stars – about one percent of the stellar content of our 13 billion-year-old Galaxy.

The spacecraft contains two telescopes, involving ten mirrors of different shapes and sizes to collect, focus and direct light onto Gaia's camera. There, on the focal plane, are the mission's three science instruments: the astrometric instrument, the photometric instrument and the radial velocity spectrograph.

With a total of 106 CCD detectors and almost one billion pixels, Gaia's camera is the largest ever flown into space.

Launched on 19 December 2013 on a Soyuz-STB/Fregat-MT launch vehicle from Europe's spaceport in Kourou, French Guiana, Gaia travelled to its orbit around the Lagrangian point L2, 1.5 million km further from the Sun than Earth.

One thousand days after launch, on 14 September 2016, the mission releases its first set of data, based on Gaia's first year of scanning the sky, from the start of scientific operations in July 2014 to September 2015.

The first Gaia data release contains a catalogue of 1 140 622 719 stars with precise measurements of their position on the sky and brightness.

From the first year of Gaia's observations alone, it is not possible to separate two concurrent effects in the changes of stellar positions recorded by the satellite: the apparent annual shift caused by Earth's motion around the Sun, or parallax, which is inversely proportional to a star's distance, and the continuous motion across the sky as stars drift through the Galaxy.

However, it was possible to estimate the distance from us and the proper motion for the 2 057 050 stars in common with the earlier Hipparcos and Tycho-2 Catalogues, based on data from ESA's Hipparcos mission.

There are several classes of variable stars: the first Gaia data release includes 599 Cepheid stars – young, massive stars pulsating with periods of several days or weeks – and 2595 RR Lyrae stars – old, low-mass stars with periods around one day or even less. Among them, 43 Cepheids and 343 RR Lyrae stars are new discoveries.

So far, the spacecraft has recorded over 50 billion source transits over its focal plane, more than 110 billion photometric observations, and almost 10 billion spectra. Six data processing centres are involved in the data challenge, and about 120 000 hours of computations have so far been necessary to identify sources in the data collected by the spacecraft and associate them with the corresponding object in the sky.

A large pan-European team of expert scientists and software developers, the Data Processing and Analysis Consortium (DPAC), is responsible for the processing and validation of Gaia's data, with the final objective of producing the Gaia Catalogue. Scientific exploitation of the data will only take place once they are openly released to the community.