Astrometry through the ages

Astrometry through the ages 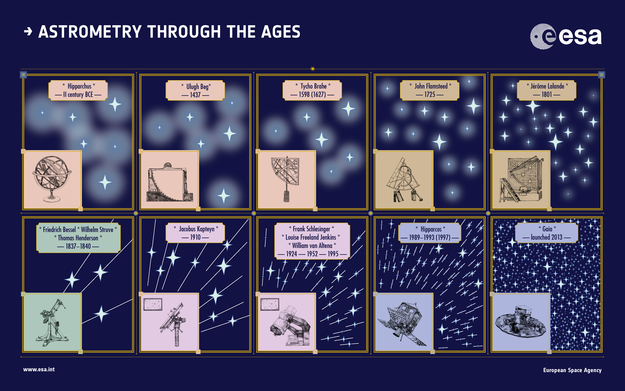 Astrometry, the science of charting the sky, is one of the oldest branches of astronomy. Over the centuries, scientific and technological advancements have gradually improved the quality and information content of stellar catalogues.

This infographic illustrates qualitatively the progress in size and precision of measuring stellar positions and distances through the ages, featuring a series of landmarks in the history of astrometry, from ancient scientists to the space missions of our time.

The precision of stellar position measurements in the most ancient catalogues (top row) is represented with a blur around the stars, while the precision of the stellar distance measurements in the modern catalogues (bottom row) is conveyed with a linear ruler pointing towards the lower left corner of each frame – representing the location of Earth – and passing through each star. In the case of Gaia, ESA's state-of-the-art space mission currently charting over one billion stars (bottom right frame), the rulers are much smaller than the star symbols and thus not visible, to indicate the unparalleled precision of the mission.

The first documented records of systematic astronomical observations date back to the Assyro-Babylonians around 1000 BCE, and the oldest known stellar catalogue was compiled in the second century BCE by the Greek astronomer Hipparchus of Nicaea.

Hipparchus' catalogue (first frame, top row) lists the positions of 850 stars with a precision of less than one degree (one degree is twice the angular size of the full Moon) determined using only naked-eye observations and the few instruments available at the time: gnomons, astrolabes, and armillary spheres.

In the fifteenth century, Ulugh Beg of the Timurid dynasty constructed an enormous sextant with a radius of 36 metres in Samarkand, located in present-day Uzbekistan. Ruling over Central Asia, Ulugh Beg was also an astronomer and mathematician, and he compiled a catalogue of 994 stellar positions with a precision slightly better than that of Hipparchus (second frame, top row).

In the late sixteenth century, Danish astronomer Tycho Brahe measured the positions of about 1000 stars with a precision of about one arcminute, using large quadrants and sextants at the Uraniborg observatory on the island of Hven (in present-day Sweden). His catalogue (third frame, top row) was completed in 1598 and published in 1627.

In 1725, English astronomer John Flamsteed published the first stellar catalogue (fourth frame, top row) compiled with the aid of a telescope, listing the positions of almost 3000 stars with a precision of 10-20 arcseconds. French astronomer Jérôme Lalande published an even greater catalogue (fifth frame, top row) with the position of 50 000 stars and a precision of around three arcseconds, in 1801.

Not so long after that, in 1838, German astronomer Friedrich Bessel was the first to publish a reliable measurement of parallax, the yearly displacement of a star's position due to Earth's revolution around the Sun. Bessel's measurement for the star 61 Cygni amounted to 0.314 arcseconds, placing the star at a distance of about 10 light-years.

Bessel used a special type of telescope, the heliometer, originally developed to observe the Sun and consisting of a lens cut in half. Two more astronomers, the German Wilhelm Struve and the British Thomas Henderson, also successfully measured parallaxes in the late 1830s. While not strictly a catalogue, these three were the first measurements of stellar distances in the history of astronomy (first frame, bottom row).

From the 1850s onwards, the application of photography to astrometry transformed the practice of charting the sky. Compiling many photographic observations, Dutch astronomer Jacobus Kapteyn started measuring the parallax of a few hundreds of stars in the early 1900s (second frame, bottom row).

In 1924, American astronomer Frank Schlesinger made huge progress in the use of photographic plates to measure parallaxes and published a catalogue with the parallaxes of almost 2000 stars, probing stellar distances out to a few dozen light-years from Earth. His catalogue was extended to about 6000 stars by Louise Freeland Jenkins in 1952, and to over 8000 stars by William van Altena in 1995 (third frame, bottom row), but the flickering effect caused by Earth's atmosphere and the distortion of the telescopes caused by Earth's gravity prevented astronomers from reaching a precision better than about 0.01 arcseconds.

The onset of the space age brought astrometry firmly back to centre stage in astronomy. ESA's Hipparcos mission, operating from 1989 to 1993, was the first space telescope devoted to measuring stellar positions.

The Hipparcos catalogue, released in 1997, contains the position, parallax and proper motion of 117 955 stars with a precision of 0.001 arcseconds, allowing astronomers to probe stellar distances out to over 300 light-years (fourth frame, bottom row).

The Gaia mission is building on the legacy of Hipparcos to chart one billion stars – about one per cent of the content of our Galaxy. Eventually, it will measure positions and parallaxes with astrometric precisions down to 0.00001 arcseconds for the brightest stars observed (fifth frame, bottom row).

Read more in the History of Astrometry series: http://sci.esa.int/gaia/history-of-astrometry

From Hipparchus to Hipparcos: A sonification of stellar catalogues