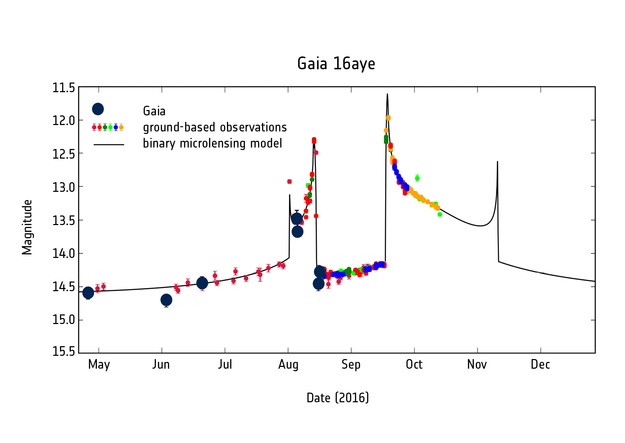 Variations of brightness of the star Gaia16aye caused by a microlensing event, as a massive object passed across its line of sight. The Gaia Photometric Science Alerts Team nicknamed this star Ayers Rock, after the famous landmark in Australia.

After the initial discovery of this magnitude 14.5 star with Gaia (dark circles), astronomers started observing it with different telescopes on the ground (coloured circles), revealing a rather peculiar pattern of brightness variations.

Instead of a single rise and fall, the star has undergone two consecutive brightness peaks of roughly two magnitudes, then became fainter for a few weeks. It later exhibited a sharp increase to magnitude 12 and rapidly declined again.

The intricate pattern of variations suggests that the star is not being lensed by a single object but rather by a binary system. The black line shows the expected brightness variation from a microlensing model with a binary lens, which most likely consists of two stars, but might also involve a planet or even a black hole.