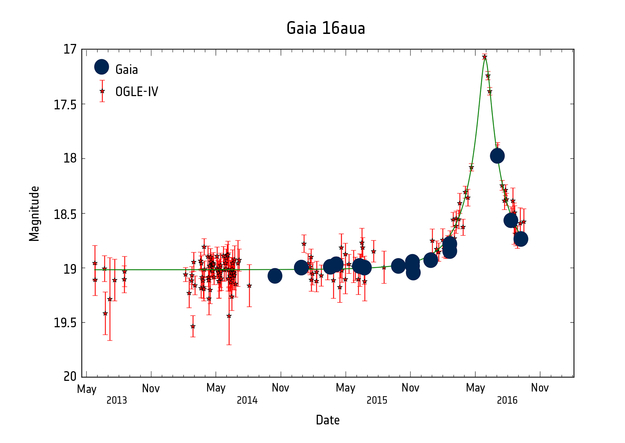 Variations of brightness of the star Gaia16aua caused by a microlensing event, as a massive object passed across its line of sight. The Gaia Photometric Science Alerts Team nicknamed this star Auala, after a small village in Samoa.

It is a faint star of magnitude 19 that suddenly brightened by two magnitudes in July 2016. The brightness rise and subsequent decrease were observed independently both by Gaia (dark circles) and by the ground-based Optical Gravitational Lensing Experiment as part of the OGLE-IV Galaxy Variability Survey (black stars with red error bars).

The OGLE light curve is much more densely covered with data points than Gaia's and allows the astronomers to confirm the nature of the event. The expected brightness variation from a microlensing model is shown as a green line.