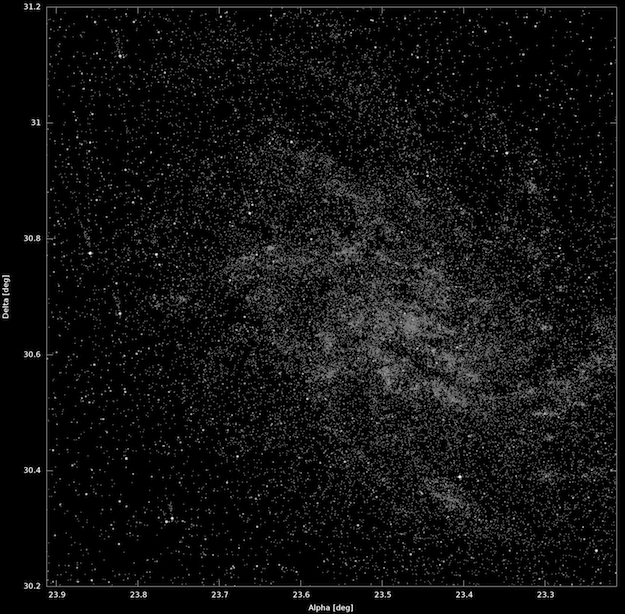 A view of M33, also known as the Triangulum galaxy, obtained by ESA's Gaia satellite.

Located some 2.4 million light-years away, M33 is one of our neighbouring galaxies and is part of the Local Group, the assembly of galaxies that includes our Milky Way and the Andromeda galaxy. A spiral galaxy with less than one tenth the mass of the Milky Way or Andromeda, M33 is the third largest member of the Local Group and is thought to be a satellite galaxy of Andromeda.

The image, based on 26 scans performed between 7 and 9 December 2016, shows all points where Gaia detected one or more sources.

Gaia's detections correspond to about 40 000 of the galaxy's brightest stars, a small fraction of the total stellar population of M33, which amounts to roughly 40 billion stars. The high stellar density of this region means that Gaia can only detect a fraction of these extragalactic stars each time it scans this portion of the sky.

Even if very powerful, the data processing units on the satellite have a limit to the number of objects that can be observed per second without saturating the onboard computer. As time goes by, Gaia will survey these regions on many more occasions and with different scanning configurations, eventually recording more of the detected stars.