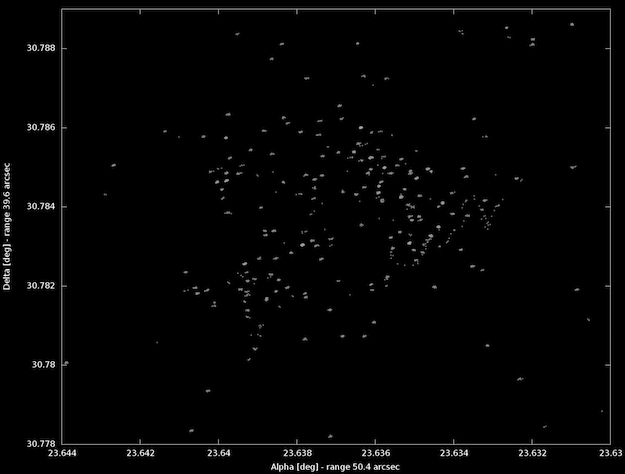 A view of NGC 604, a star-forming region located in the M33 galaxy, obtained by ESA's Gaia satellite.

With a density of about one million stars per square degree, NGC 604 is a challenging region to observe for Gaia.

Even if very powerful, the data processing units on the satellite have a limit to the number of objects that can be observed per second without saturating the onboard computer. As time goes by, Gaia will survey these regions on many more occasions and with different scanning configurations, eventually recording more of the detected stars.

A comparison between the Gaia detections in that region and a high-resolution image of this stellar nursery from the NASA/ESA Hubble Space Telescope shows that Gaia has detected about 150 individual stars in the NGC 604 region, which spans only about 0.55 square arcminutes in the sky. This number might not sound big in absolute terms, but it is impressive when considering that the observed field is about 2000 times smaller than the area covered by the full Moon in the sky, revealing that Gaia is able to detect a significant number of extragalactic stars.

This is even more remarkable given that Gaia's observed stars are automatic detections obtained by the satellite’s onboard computing system while scanning over the region, whereas the stars detected in astronomical images, such as those from Hubble, are the result of dedicated observations obtained by pointing at specific regions on the sky, which are later analysed by scientists.

The apparent alignment and clustering of the detections shown in this image is an artefact of Gaia's scanning procedure.