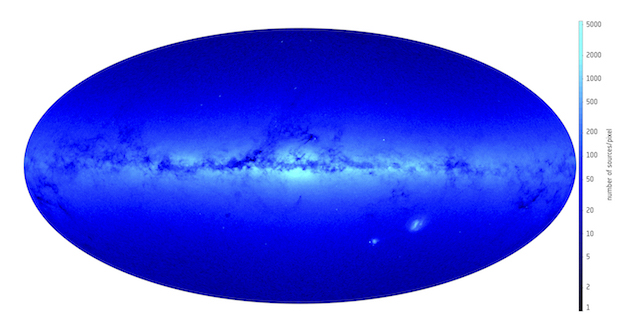 This map shows the distribution on the sky of the stars that have been used to generate a preliminary map of Gaia's sky in colour. It is meant as a visual aid to better appreciate the content of the view of the sky in colour.

The map includes data from 18.6 million stars that have been selected randomly from all Gaia stars with magnitude brighter than 17 and for which both colour measurements (from the blue and the red channels of Gaia's photometric instrument) are available.

It shows the number of stars in each pixel, which is higher along the Galactic Plane – the roughly horizontal structure that extends across the image, corresponding to the most densely populated region of our Milky Way galaxy – and lower towards the poles.

Even though these two maps are only meant as an appetizer to the full treat of next year's release, it is already possible to spot some interesting features.

The dark regions along the plane correspond to clouds of dust that obscure part of the starlight. The two Magellanic Clouds – small satellite galaxies of our Milky Way – are also visible in the lower part of the map.

This image is based on only about 1–2 percent of the total number of stars that were used to generate Gaia's first all-sky map, which was released in 2016, and has therefore a much lower resolution. The data used for the new map, however, were collected over a longer stretch of time, between July 2014 and May 2016. As a result of both the lower resolution of the image and the more homogeneous coverage of the sky due to the longer observation period, this image does not show the dark stripes and other artefacts caused by the satellite's scanning strategy that were visible in the first map.