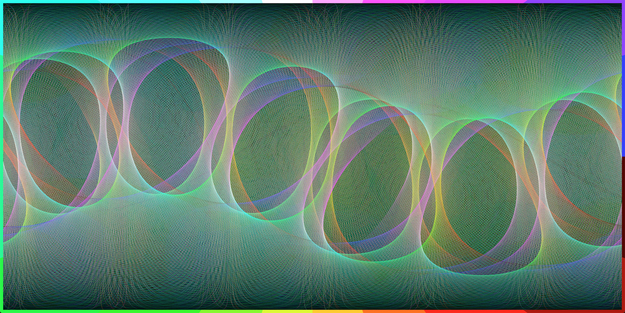 This colourful streamer is created from real data that represents the viewing direction of ESA's Gaia satellite as it scans across the sky.

Gaia's mission is to make the largest, most precise 3D map of our Galaxy by surveying more than a thousand million stars. This goal relies on the systematic and repeating observation of star positions in two fields of view to detect any changes in an object's motion through space. As such, Gaia is rotating slowly, sweeping its two telescopes, which are separated by 106.5°, across the entire celestial sphere to make four complete rotations per day.

At the same time, its spin axis changes orientation around the Sun with a period of about 63 days, allowing different parts of the sky to be scanned. This approach builds up an interlocking grid of stellar positions and motions.

While star maps have provided the focus of previous image releases, this image represents the motion of the satellite itself across the full sky.

Gaia's attitude is plotted every second with two dots: one to represent each of the two telescopes at that moment in time. The positions are plotted in celestial coordinates: right ascension (horizontal axis) and declination (vertical axis), which can be imagined as lines of longitude and latitude printed on the inside of the celestial sphere.

Zooming in reveals first a cross weave-like pattern, and ultimately the individual dots. The highest density of overlapping pattern represents the areas of sky that have been scanned multiple times in different directions already, while the lower density regions were scanned fewer times and in fewer different directions. Eventually the gaps will close, as Gaia makes more and more repeated scans of the sky.

Gaia was launched on 19 December 2013 and began routine operations in July 2014. The first catalogue of more than a billion stars, based on the first 14 months of scanning, was published in September 2016. The image shown here was created from Gaia's movements between 1 October 2014 and 31 May 2016. This corresponds to the period that includes the second data release, which is scheduled for April 2018.