Gaia's view of a dark nebula in Orion – flux map 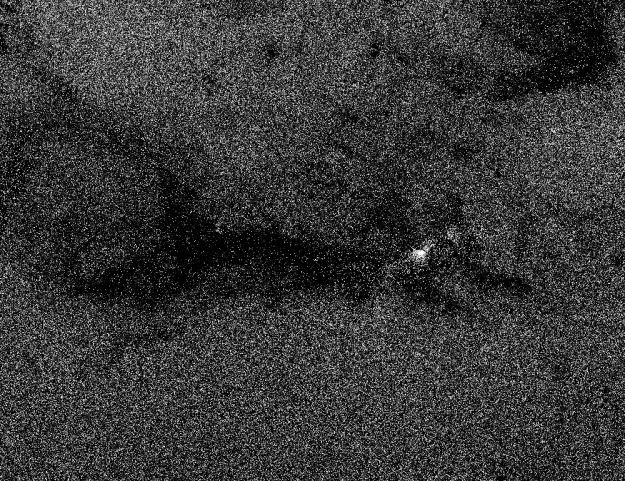 The Orion A portion of the Orion Molecular Cloud, a vast star-forming complex of cosmic gas and dust in the constellation of Orion the Hunter, as viewed by ESA's Gaia satellite after its first 14 months of operations. This view is not a photograph but was compiled by mapping the total amount of radiation, or flux, recorded by Gaia in each pixel of the image.

The image is dominated by the brightest, most massive stars in the region; in some spots, these stars outshine their less bright, lower-mass counterparts.

Various southern hemisphere civilisations identify shapes of creatures from the animal world in the dark lanes crossing the bright background of the Milky Way. Echoing this time-honoured tradition, astronomers have spotted the shape of a cat – or that of a fox – in this cloud, depending on whether the bright spot just right of centre is viewed as a nose or an eye. In fact, the cat's nose (or fox's eye) corresponds to the Orion Nebula Cluster, a young open cluster near M42.

A complementary view of the Orion A nebula, created by mapping the total density of stars detected by Gaia in each pixel, is available here.

This image was produced by André Moitinho, Márcia Barros, Carlos Barata from the University of Lisbon, Portugal, and Hélder Savietto from Fork Research, Portugal. The creation of this and other similar images is described in the paper "Gaia Data Release 1: The archive visualisation service" by A. Moitinho et al. 2017, A&A, 605, A52.
View »
27-May-2022 05:28 UT

Gaia's view of a dark nebula in Orion