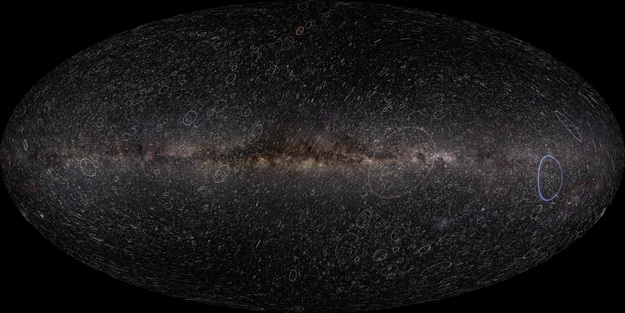 An all-sky view of our Milky Way Galaxy and neighbouring galaxies, showing the parallaxes of 96 million stars measured by ESA's Gaia satellite between July 2014 to May 2016.

Parallax is an apparent shift of the position of stars on the sky caused by Earth's yearly orbit around the Sun. These shifts are tiny, so to make them visible they have been exaggerated by 100 000 times in this view.

Parallax measurements can be used to estimate the distance to the stars: stars that are closer to us appear to draw larger shapes in the sky than their more distant counterparts.

This image shows a subset of stars in Gaia's second data release with reasonably small parallax errors (less than 12.5 per cent for most stars, and less than 50 per cent for the brightest stars).

The bright horizontal structure visible at the centre of the image is the Galactic plane, the flattened disc that hosts most of the stars in our home Galaxy. The positions of stars are shown in the Galactic coordinate system.

Parallax and proper motion on the sky - 360° view