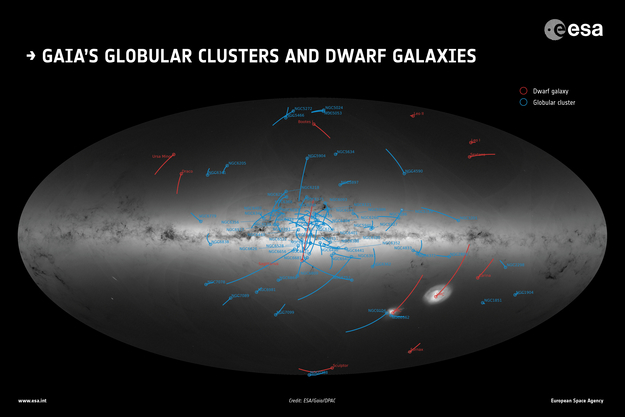 An all sky view of 75 globular clusters (blue) and 12 nearby dwarf galaxies (red) as viewed by ESA's Gaia satellite using information from the mission's second data release.

Globular clusters are ancient systems of stars, thought to date to the very origin of our Milky Way galaxy. As such they are like ‘fossils' from the early years of our galactic home. Dwarf galaxies are satellites of the Milky Way, each containing between 100 thousand to a few billion stars.

Using data from Gaia's second release, astronomers have measured the motion of 75 globular clusters in the halo of the Milky Way, and of 12 dwarf galaxies orbiting the Galaxy. The lines indicate the orbits of these stellar collections, as calculated from Gaia's measurements of the proper motions – the true motion across the sky – of many stars in each of these clusters and galaxies.

A preliminary study of the orbits suggests that a pair of globular clusters, NGC5053 and NGC5024, are traveling together through space. Likewise, also the two dwarf galaxies Draco and Ursa Minor seem to be moving on similar orbits.

Using the most distant of these galaxies, Leo I, located 840 000 light years away, astronomers were able to derive a lower limit for the mass of our Galaxy, amounting to one trillion (1012) times the mass of the Sun. This value is in agreement with previous measurements and indicates that the Milky Way contains about 20 times more mass than what we can see in stars and gas, which is evidence for the presence of the elusive dark matter.

The underlying image of the all-sky view by Gaia is not a photograph but was compiled by mapping the total density of stars detected by the satellite in each pixel.