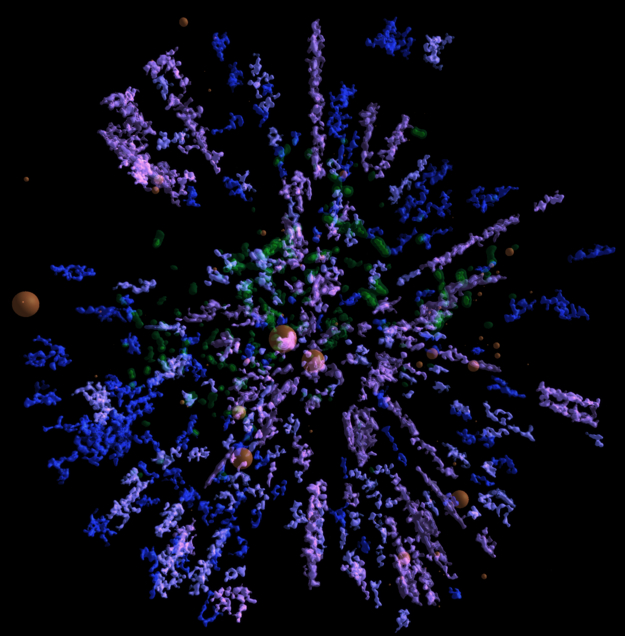 The second data release of ESA's Gaia mission, made in April, has marked a turning point in the study of our Galactic home, the Milky Way. With an unprecedented catalogue of 3D positions and 2D motions of more than a billion stars, plus additional information on smaller subsets of stars and other celestial sources, Gaia has provided astronomers with an astonishing resource to explore the distribution and composition of the Galaxy and to investigate its past and future evolution.

The majority of stars in the Milky Way are located in the Galactic disc, which has a flattened shape characterised by a pattern of spiral arms similar to that observed in spiral galaxies beyond our own. However, it is particularly challenging to reconstruct the distribution of stars in the disc, and especially the design of the Milky Way's arms, because of our position within the disc itself.

This is where Gaia's measurements can make the difference.

This image shows a 3D map obtained by focusing on one particular type of object: OB stars, the hottest, brightest and most massive stars in our Galaxy. Because these stars have relatively short lives – up to a few tens of million years – they are mostly found close to their formation sites in the Galactic disc. As such, they can be used to trace the overall distribution of young stars, star formation sites, and the Galaxy's spiral arms.

The map, based on 400 000 of this type of star within less than 10 000 light-years from the Sun, was created by Kevin Jardine, a software developer and amateur astronomer with an interest in mapping the Milky Way using a variety of astronomical data.

It is centred on the Sun and shows the Galactic disc as if we were looking at it face-on from a vantage point outside the Galaxy.

To deal with the massive number of stars in the Gaia catalogue, Kevin made use of so-called density isosurfaces, a technique that is routinely used in many practical applications, for example to visualise the tissue of organs of bones in CT scans of the human body. In this technique, the 3D distribution of individual points is represented in terms of one or more smooth surfaces that delimit regions with a different density of points.

Here, regions of the Galactic disc are shown with different colours depending on the density of ionising stars recorded by Gaia; these are the hottest among OB stars, shining with ultraviolet radiation that knocks electrons off hydrogen atoms to give them their ionized state.

The regions with the highest density of these stars are displayed in pink/purple shades, regions with intermediate density in violet/light blue, and low-density regions in dark blue. Additional information from other astronomical surveys was also used to map concentrations of interstellar dust, shown in green, while known clouds of ionised gas are depicted as red spheres.

The appearance of 'spokes' is a combination of dust clouds blocking the view to stars behind them and a stretching effect of the distribution of stars along the line of sight.

An interactive version of this map is also available as part of Gaia Sky, a real-time, 3D astronomy visualisation software that was developed in the framework of the Gaia mission at the Astronomisches Rechen-Institut, University of Heidelberg, Germany.

Further details including annotated version of the map: Mapping and visualising Gaia DR2