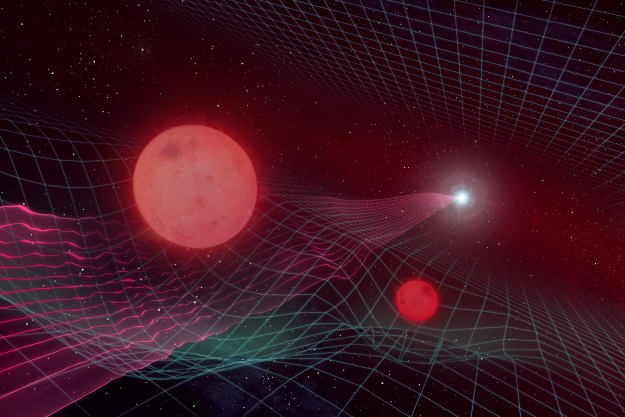 Artist's impression of the binary stellar system discovered in the Gaia16aye microlensing event, its gravity bending the fabric of spacetime and distorting the path of light rays coming from an even more distant star.

The sudden brightening of Gaia16aye was first spotted in August 2016 by ESA's star-mapping satellite, Gaia, and the event was named Gaia16aye. The detection was made as part of the Gaia Photometric Science Alerts programme, a system that scans daily the huge amount of data coming from Gaia and alerts astronomers to the appearance of new sources or unusual brightness variations in known ones, so that they can quickly point other ground and space-based telescopes to study them in detail.

Follow-up observations performed with more than 50 telescopes worldwide revealed that the source was behaving in a rather strange way: after getting brighter and brighter, its luminosity suddenly dropped within one day.

Astronomers soon realised that this brightening was caused by gravitational microlensing – an effect predicted by Einstein's theory of general relativity, caused by the bending of spacetime in the vicinity of very massive objects, like stars or black holes.

The Gaia alert led to a 500-day long global observation campaign, which lasted until the end of 2017, monitoring the background star as it brightened up and subsequently declined five times. Extensive participation of ground-based telescopes from around the world, including the contribution of professional astronomers, amateur astronomers and volunteers, enabled astronomers to gather a large amount of data – almost 25 000 individual data points – which were used to study the foreground object that was acting as a lens on the more distant star.

The data revealed the gravitational lens is actually a binary stellar system, consisting of two rather small stars, with 0.57 and 0.36 times the mass of our Sun, respectively. Separated by roughly twice the Earth-Sun distance, the stars orbit around their mutual centre of mass in less than three years.

Gaia16aye is the second microlensing event detected by the Gaia mission.