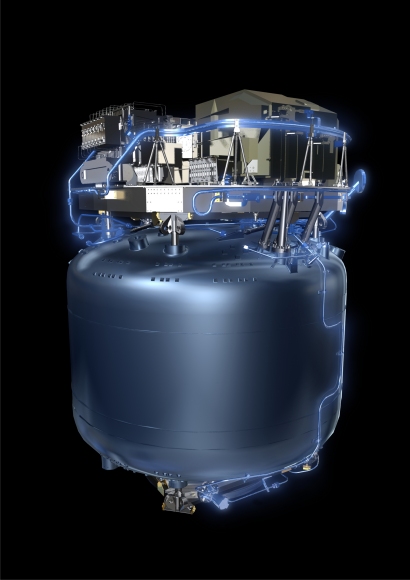 Herschel's superfluid helium II tank, where the helium is kept in its superfluid state at boiling temperature (1.65 K or –271.5 °C). The helium is used to cool the three science instruments' focal plane units (FPU) and the shields.

A porous plug allows the separation of the gas from the boiling liquid helium such that only gas leaves the tank. It slowly flows from the tank into pipes around the payload (highlighted in blue) to cool it to between 1.7 K, 4 K and about 10 K.

After passing the optical bench, the helium gas flows on through the cryostat vacuum vessel. Two subsequent stages are illustrated in the two "related images" on the right-hand side.