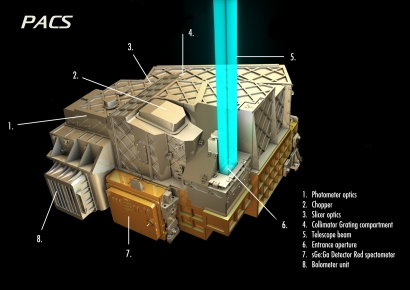 The Photoconductor Array Camera and Spectrometer (PACS) consists of four detector arrays: two filled silicon bolometer arrays and two Ge:Ga photoconductor arrays. The bolometer arrays are dedicated to wideband photometry, while the photoconductor arrays are to be employed exclusively for medium-resolution spectroscopy. PACS can be operated either as an imaging photometer, or as an integral field line spectrometer. PACS was developed by a consortium led by the Max-Planck-Institut für extraterrestrische Physik, Germany.
View »
27-Jan-2023 14:52 UT