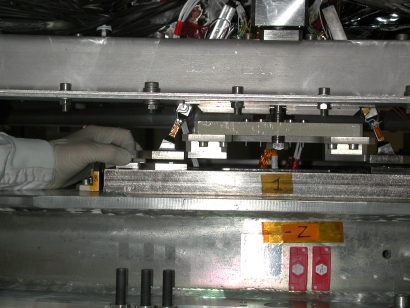 Close-up view of one of the three bipods that form the interface between the telescope and cryostat vacuum vessel. This image was taken during the fit-check of the telescope flight model on a reference plate. The bipod is visible behind the bolted bar runing across the top of the image.

The titanium bipods are attached to the telescope's primary mirror (above and outside of this view) and each have an optimal angle of 49° between their two legs.