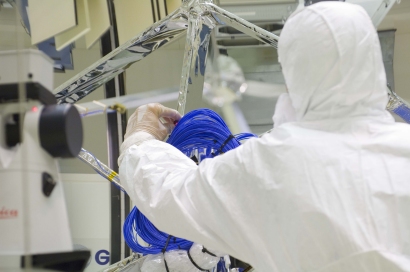 Close-up of the Herschel telescope during the precision M1 to M2 mirror separation measurements, with the spacecraft in horizontal position. The operator can be seen placing laser targets at the rear of the M2 (secondary mirror). In the foreground (left) is the high precision laser tracker device. The blue wiring is a cable harness connecting the secondary mirror and its supporting structure (hexapod) to a set of motion sensors (accelerometers) that will be used during the upcoming vibration testing of the spacecraft.
View »
7-Dec-2021 06:02 UT