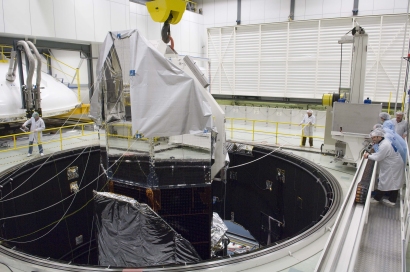 This image shows Herschel as it is being lifted out of the LSS. The telescope is covered by a protective foil to protect the contamination sensitive surface of the telescope's primary mirror.

Visible in the lower centre, standing inside the LSS, is the custom-build radiator which simulated the thermal radiation of the Sun onto Herschel's large solar array and sunshield during the environmental tests.