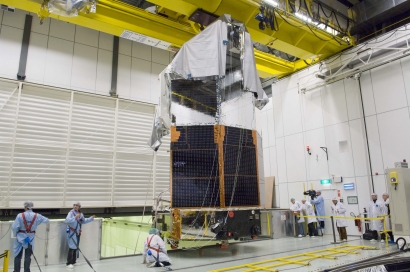 This image shows Herschel on the platform at the top of the LSS after it was lifted through the top opening of the LSS chamber (just visible in the lower right corner). The spacecraft next was lowered over the edge of the platform to the ground floor of the cleanroom.

The telescope is covered by a protective foil to protect the contamination sensitive surface of the telescope's primary mirror.