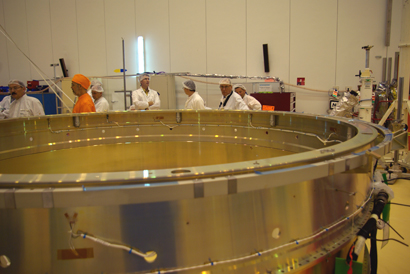 The launch adapter for Herschel in the S1B clean room, Kourou, French Guiana. Once the spacecraft has been mated to the adapter the metal band (seen here encircling the top of the adapter) will be clamped shut, releasing only when a pyrotechnic device has been fired to trigger the separation of spacecraft and launcher. After the clamp has been released the spacecraft is pushed away from the launcher by a number of spring-loaded pushing devices (the cylindrical tubes visible under the rim of the clamp band.) The wires that can be seen around the adapter are connected to sensors; some of these record the environmental conditions during launch, others confirm separation of spacecraft and launcher.
View »
22-Jan-2022 12:02 UT