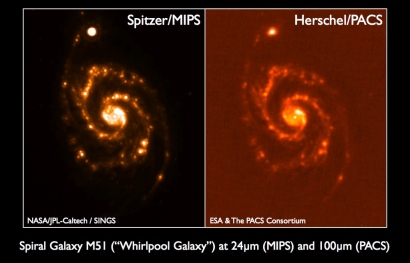 Comparison of M51 imaged with the Spitzer Space Telescope (left panel) and an image of the same galaxy taken with the Herschel Space Observatory (right panel), launched just a month ago. From a visual inspection of the images, Spitzer/MIPS at 24 µm and Herschel/PACS at 100 µm, it can be concluded that they have a generally similar appearance. Since the ratios of both the aperature sizes and the observing wavelengths are approximately four, it can be concluded that Herschel is performing well optically at 100 µm, which is a short wavelength for Herschel.
View »
27-Jan-2023 14:01 UT