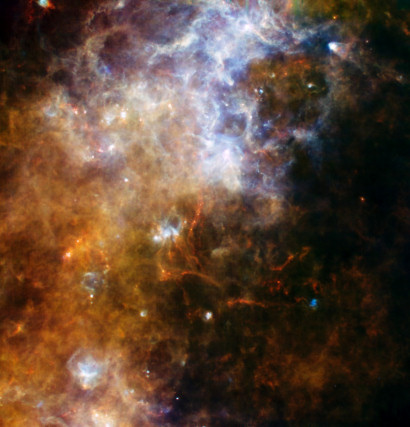 This composite image has been constructed from individual SPIRE and PACS images which have been combined by colour coding the different observed wavelengths: here blue denotes 70 µm and green 160 µm emission, while red is the combination of the emission from all three SPIRE bands at 250/350/500 µm.

The images are of a 2×2 degree field in an area near the Galactic Plane, 60 degrees from the Galactic Centre, in the constellation of the Southern Cross. This region is considered to be a good test case for verification and demonstration purposes as it is typical of crowded fields where there may be many molecular clouds along the line-of-sight. The images shown here were obtained on 3 September 2009 and are based on just over 6 hours of observations.

This image clearly demonstrates how the colour-coding allows us to differentiate material that is extremely cold (red) from that which is slightly warmer. Since stars form in cold, dense environments, the composite image easily locates the star-forming filaments that would be very difficult to isolate from a map made at a single far-infrared or submillimetre wavelength. This is especially important in a very crowded field like this, which is likely to include many molecular clouds along the line of sight. The image contains an incredible network of filamentary structures with surprising features indicative of a chain of near-simultaneous star-formation events, glittering rather like beads of water on a string in the sunlight.