HH 46: measuring the energetics of jets

HH 46: measuring the energetics of jets 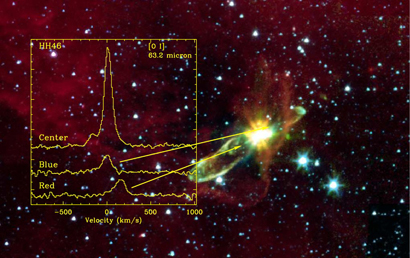 PACS spectrum of the young star HH 46, superposed on an image of the source by the Spitzer Space Telescope. PACS has imaged a strong line of atomic oxygen toward a young Sun-like star, HH 46. Interestingly, the line detected by PACS shows not only the low velocity gas swept up by the jet, but also very fast moving gas that is part of the jet itself. This detection will allow astronomers to measure directly the energy involved in both processes. This observation was made during the Herschel Science Demonstration Phase. The scientific rights of these data are owned by the Key Program consortium "Water in Star Forming Regions" (WISH) led by E.F. van Dishoeck. (To learn more about WISH see the link in the right-hand menu). The HH 46 study is led by T. van Kempen.
View »
26-May-2022 18:27 UT