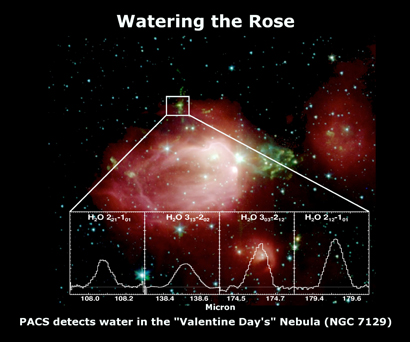 PACS spectra of various strong fingerprints of water toward the embryonic star NGC 7129. The background image is the 'Valentine day' ('Rose') nebula - a stellar nursery resembling a pink rosebud - observed by the Spitzer Space Telescope. As young stars heat up their surroundings, water molecules frozen on the icy grains evaporate back into the gas phase, just like ice on a comet in our own Solar System sublimates when heated by the Sun. Thus, the embryonic stars themselves are expected to exhibit copious signatures of steam. PACS has detected numerous fingerprints of gaseous water toward a forming star that is slightly more luminous than our own young Sun. The cloud seen by PACS contains enough water to fill at least a million oceans! This observation was made during the Herschel Science Demonstration Phase. The scientific rights of these data are owned by the Key Program consortium "Water in Star Forming Regions" (WISH) led by E.F. van Dishoeck. (To learn more about WISH see the link in the right-hand menu). The NGC 7129 IRS study is led by D. Johnstone.
View »
26-May-2022 18:00 UT