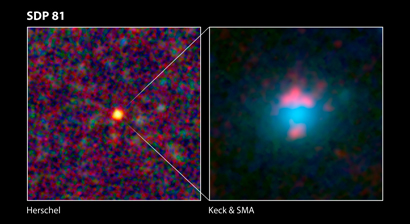 SDP 81 (left) is one of five distant sub-millimetre galaxies that were identified by the Herschel Space Observatory as being peculiar by virtue of appearing as particularly bright objects at sub-millimetre wavelengths. Closer observation at higher resolution using ground-based telescopes (right) revealed that Herschel had found a sub-millimetre galaxy being gravitationally lensed by another, foreground galaxy.

In the right-hand panel, the foreground galaxy (blue) is seen at optical wavelengths by the W. M. Keck Observatory in Hawaii. The background galaxy (pink) shines brightly at much longer wavelengths, and was imaged using the sub-millimetre observations of the Smithsonian Astrophysical Observatory's Submillimeter Array, also in Hawaii. The light coming from the background galaxy is deflected by the mass of the foreground galaxy, producing a highly magnified and distorted image. The background galaxy is actually imaged more than once: the pink arc in the upper part of the image is in fact composed of three, merged images of the same galaxy, and the pink blob in the lower part is another additional image. Multiple images are a consequence of strong gravitational lensing.

SDP 81 is one of five gravitational lens systems found in the first set of data released from the Herschel-ATLAS survey.

Part of the Herschel-ATLAS survey field

Gravitational lenses in part of the Herschel-ATLAS survey field

More on the Herschel-ATLAS survey