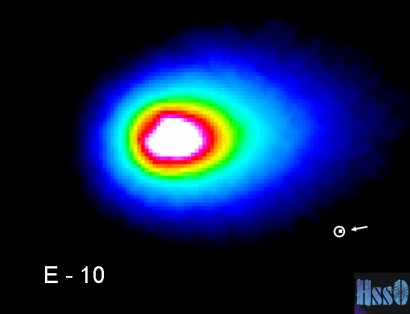 This image shows comet 103P/Hartley 2 as viewed with the PACS instrument on board Herschel. The image was taken on 25 October 2010 at 70 microns, and covers a region of 1.7 arcminutes × 1.3 arcminutes. At the time the comet was 17.5 million km from the Herschel Space Observatory.

Observing comets at this wavelength reveals information about the size of dust particles and the dust production rate. The region of high intensity corresponds to the nucleus of the comet. There is considerable extension in the anti-Sun direction, corresponding to a dust tail in optical images. The Sun symbol and arrow indicate the projected direction towards the Sun.

Spectroscopic data, acquired on the same occasion with the HIFI spectrometer on board Herschel, have revealed that comet 103P/Hartley 2 contains water with a similar deuterium-to-hydrogen ratio to that in Earth's oceans. This is the first evidence of a comet harbouring Earth-like water.