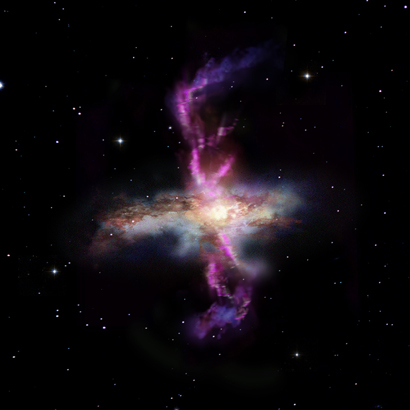 In one of the most widely accepted theories of galaxy evolution, ULIRGs are an intermediate stage in the merger-driven process that gives rise to elliptical galaxies. Within this framework, the merger of gas-rich spiral galaxies hosting supermassive black holes in their centres initially produces a galaxy with an active nucleus that is enshrouded by a mixture of gas and dust. In this phase, the object is completely obscured and can only be detected in infrared light as an ULIRG. As the system evolves, gas and dust are gradually dispersed, eventually giving rise to an exposed Active Galactic Nucleus — a quasar.

Initially, it is the merger process that triggers starbursts and the growth of the central supermassive black hole in the galaxy. Later, the starburst and accretion by the black hole generate powerful gas outflows that sweep away the galaxy's reservoir of gas. Due to these negative feedback mechanisms — that at times suppress both star formation and black hole growth — the galaxy that forms from the merger is gas-poor, populated by old stellar populations and harbours a supermassive black hole with a mass that strongly correlates with the galaxy's stellar mass, as is observed in elliptical galaxies.

The detection of outflows powerful enough to strip galaxies of their molecular gas reservoir represents solid evidence in support of the merger-driven scenario for the formation of elliptical galaxies.

Caught in the act by Herschel: galactic storms sweep away the gas