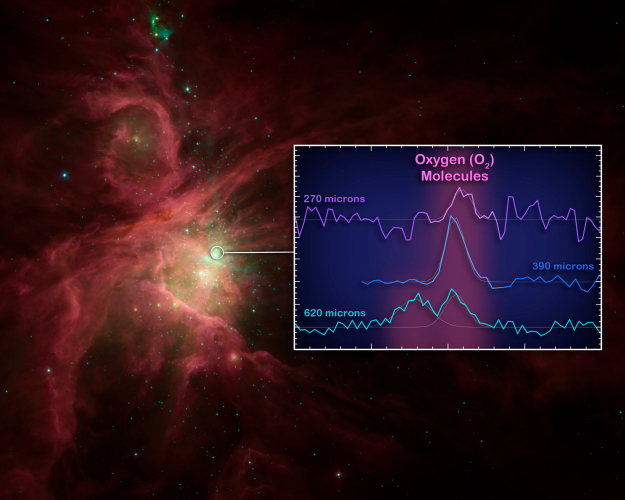 This image shows the Orion Nebula, an iconic stellar nursery where stars are formed out of a dense mixture of gas and dust. A recent study, conducted with ESA's Herschel Space Observatory, has finally found the first robust evidence of molecular oxygen (O2), among the various chemical species in the nebula.

The inset on the right-hand side shows three distinct lines emitted by oxygen molecules, at frequencies of 1121, 774 and 487 GHz, respectively, in the spectra taken with the HIFI spectrometer on board Herschel. As with many other molecules, O2 produces a number of lines at a distinct set of wavelengths, corresponding to energy released by the molecule as it undergoes changes in its rotation. These spectral lines are used by astronomers to track down the presence of a molecule in cosmic sources.

Herschel data have revealed O2 in a dense patch of gas and dust adjacent to star-forming regions in the Orion Nebula. Astronomers believe that oxygen freezes out on dust grains in molecular clouds. However, in some spots, such as the one where O2 has been found, neighbouring newborn stars heat the icy grains, causing water ice to evaporate and re-establishing chemical reactions that result in the formation of O2.

The image of the Orion Nebula was taken in infrared light by NASA's Spitzer Space Telescope.