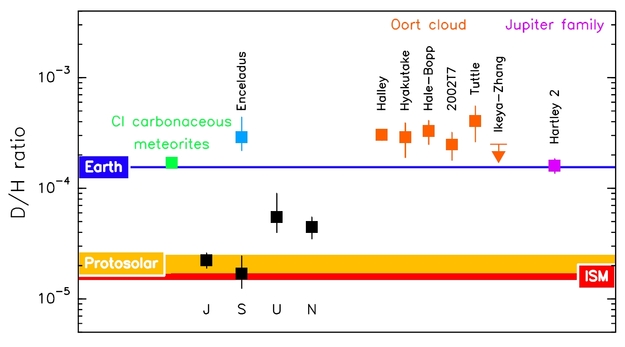 This graph displays the different values of the deuterium-to-hydrogen ratio (D/H) in water observed in various bodies in the Solar System.

The purple square on the right side of the graph shows the value of the D/H ratio in water observed in the Jupiter-Family comet 103P/Hartley 2, which is very similar to the value measured in Earth's oceans. This measurement is based on data acquired with the HIFI spectrometer on board Herschel in late 2010. As reported by Hartogh et al., 2011, these data represent the first evidence of Earth-like water detected in a comet.

The lower part of the graph shows the value of the D/H ratio measured in molecular hydrogen in the atmosphere of the giant planets of the Solar System (Jupiter, Saturn, Uranus, Neptune; black squares) and an estimate of the typical value in molecular hydrogen for the protosolar material (broad, yellow horizontal line) and in atomic hydrogen in the local interstellar medium (red horizontal line).