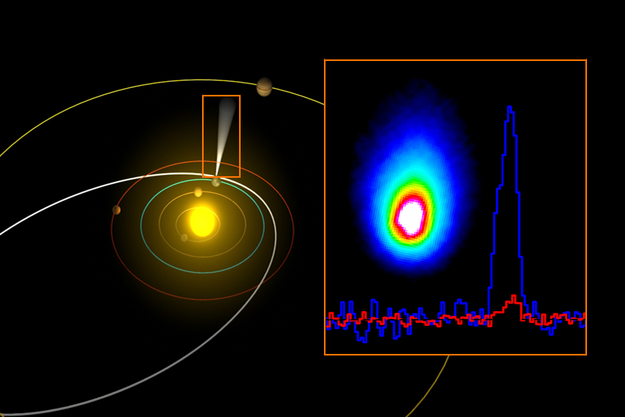 This illustration shows the orbit of the Jupiter-Family comet 103P/Hartley 2 in relation to the orbits of the innermost 5 planets of the Solar System. The comet has made its latest perihelion passage on 28 October 2010, having passed at 0.13 AU (19.45 million km) from the Earth on 20 October. This was the comet’s closest approach to our planet since its discovery in 1986. On this occasion, Herschel observed the comet, obtaining highly accurate images and spectra in the far-infrared portion of the electromagnetic spectrum.

The inset on the right side of the illustration shows the comet as viewed with the PACS instrument on board Herschel. Also shown are two lines excerpted from the spectrum of the comet taken with the HIFI spectrometer and reflecting the presence of two different isotopologues of the water molecule.

The blue curve refers to the isotopologue H218O, composed of two hydrogen (H) and one oxygen (18O) atoms, and the red curve shows the much weaker signature of another isotopologue, semi-heavy water (HDO), where one of the hydrogen atoms appears in its isotopical form of deuterium (D, or 2H). H218O was used as a proxy for 'ordinary' water (H216O).

From the relative abundance of these two molecules in various Solar System bodies, astronomers can infer the deuterium-to-hydrogen ratio (D/H) in water. By comparing the D/H ratio measured across the Solar System to that measured in Earth's oceans, it is possible to constrain the nature of the bodies that contributed most to delivering water to our planet.

The data acquired with Herschel on comet 103P/Hartley 2 represent the first evidence for Earth-like water in a comet, and suggest that comets may have played an important role in bringing water to our planet.