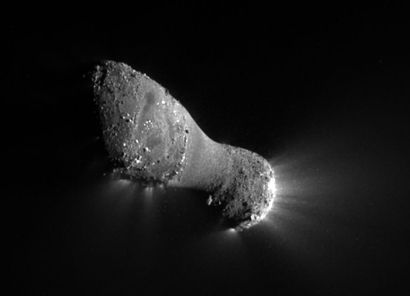 This image shows a close-up view of comet 103P/Hartley 2. It was taken by NASA's EPOXI mission, which flew past the comet on 4 November 2011.

Comet 103P/Hartley 2 is a Jupiter-Family comet, with an orbital period of 6.46 years and perihelion near the Earth's orbit, at 1.05 AU from the Sun. It was discovered by Malcolm Hartley in 1986 at the Schmidt Telescope Unit, Siding Spring Observatory, Australia, and has appeared in our skies on four more occasions since; the last time in late 2010.

On this occasion, the comet had its closest approach to Earth since its discovery. Several ground- and space-based observatories, including ESA's Herschel Space Observatory, joined in a global campaign to observe the comet at several wavelengths across the electromagnetic spectrum. The campaign also provided support to EPOXI's fly-by.

Spectroscopic data, acquired on the same occasion with the HIFI spectrometer on board Herschel, have revealed that comet 103P/Hartley 2 contains water that is similar in composition to that in Earth's oceans. This is the first evidence of a comet harbouring Earth-like water.