ESA Science & Technology - The location of comet 103P/Hartley 2, the Kuiper Belt and the Oort Cloud in the Solar System [annotated]

The location of comet 103P/Hartley 2, the Kuiper Belt and the Oort Cloud in the Solar System [annotated]

The location of comet 103P/Hartley 2, the Kuiper Belt and the Oort Cloud in the Solar System [annotated] 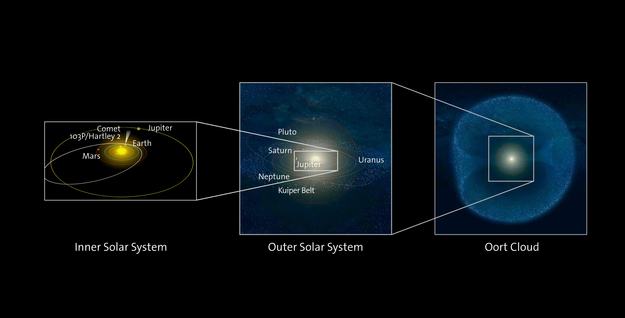 This illustration shows the locations of various classes of comets in the Solar System, relative to the orbits of the planets.

The left panel shows the inner Solar System, with the Sun and the orbits of the terrestrial planets (Mercury, Venus, Earth and Mars); farther away, the orbit of Jupiter is also shown, along with that of Jupiter-Family comet 103P/Hartley 2. With an orbital period of 6.46 years, this comet has its aphelion near Jupiter's orbit, at 5.87 Astronomical Units (AU) from the Sun, and its perihelion near the Earth's orbit, at 1.05 AU from the Sun. The orbit of Jupiter is located at a distance from the Sun of about 5 AU.

The central panel shows a larger portion of the Solar System beyond the orbit of Jupiter, including the orbits of Saturn, Uranus and Neptune as well as the orbit of Pluto and the Kuiper Belt. The Kuiper Belt is one of the two main reservoirs of comets in the Solar System. Jupiter-Family comets are believed to have formed here and to have migrated inwards only later, to their current orbits with aphelia near the orbits of Jupiter and the other giant planets. The Kuiper Belt extends from 30 to 50 AU from the Sun.

The right panel shows the Oort Cloud, the other main reservoir of comets located well beyond the outer Solar System. With highly eccentric orbits and periods of 200 years or more, Oort-Cloud comets are believed to have originated in the vicinity of the giant planets and to have been ejected later, via gravitational interactions, to their current orbits. The Oort Cloud is thought to have a roughly spherical distribution and to extend up to 50 000 AU from the Sun.