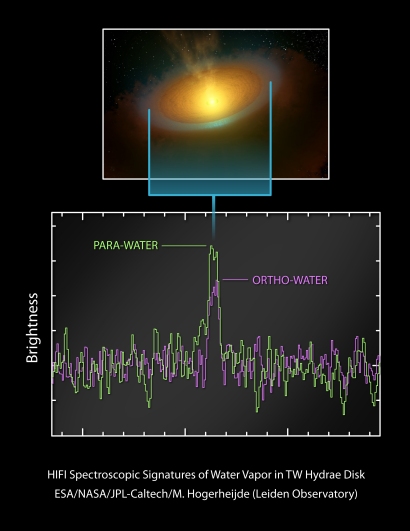 This image shows an artist's impression of the icy protoplanetary disc around the young star TW Hydrae (upper panel) and the spectrum of the disc as obtained using the HIFI spectrometer on ESA's Herschel Space Observatory (lower panel).

By analysing the spectrum, astronomers have detected the emission from cold water vapour in the planet-forming disc. The vapour arises when highly energetic radiation from the central star interacts with icy grains in the disc. The detection thus hints at a copious and otherwise undetectable supply of water ice hidden in the disc's deeper and colder layers.

The graph in the lower panel shows the spectral signature of water vapour in the disc. Water molecules come in two "spin" forms, called ortho and para, in which the two spins of the hydrogen nuclei have different orientations. By comparing the relative amounts of ortho and para water, astronomers can determine the temperatures under which the water formed. Lower ratios indicate cooler temperatures, though in practice the analysis is much more complicated. The ratio of ortho to para water observed in TW Hydrae's protoplanetary disc is low enough to point to the presence of cold water vapour.

Herschel discovers tip of cosmic iceberg around nearby young star