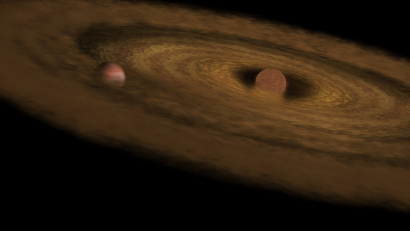 This illustration shows an artist's impression of the brown dwarf 2MASSW J1207334-393254, or 2M1207 for short. With a mass that amounts to 25 times that of Jupiter, 2M1207 is surrounded by a circumstellar disc of gas and dust and possesses a planetary companion five times more massive than Jupiter. The planetary companion lies at a very large distance from 2M1207 – the projected distance between the two bodies measuring 55 astronomical units (AU).

Sub-millimetre observations performed with the SPIRE instrument on board ESA's Herschel Space Observatory have shown that the disc's total mass amounts to about three to five times the mass of Jupiter and that its radius ranges between 50 and 100 AU. With such a massive disc, it is likely that the planetary-mass companion originated directly from disc fragmentation, thus challenging the standard scenario of giant planet formation via core accretion.