Herschel image of Centaurus A

Herschel image of Centaurus A 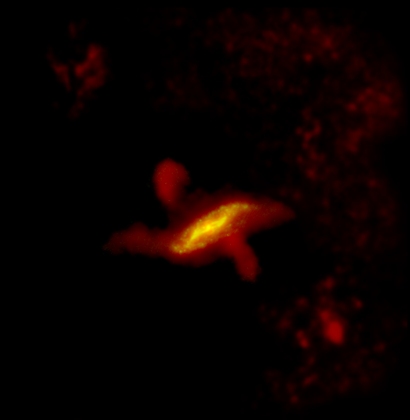 The central region, mostly evident in the PACS data, highlights the warped appearance of the galaxy's disc, which consists of a number of inclined, concentric rings of gas and dust and extends up to several thousand light-years from the galaxy's centre. While only a trace component in terms of mass, cold dust shines brightly at far-infrared and sub-millimetre wavelengths and can be used to trace the disc's structure. The curious shape of the disc suggests that it is the remnant of a merger that the galaxy has undergone with a smaller, gas-rich galaxy; this merger is also believed to be responsible for having triggered the AGN activity observed in Centaurus A.

Farther away, data from SPIRE reveal a glow that extends beyond the disc and traces the two jets that stem from the galaxy's centre in opposite directions. Although emission seen by the SPIRE instrument is most often associated with thermal emission from cold dust, in this case the synchrotron emission from the jets is so strong that it is readily detected by the instrument, and dominates the emission, as shown in the image.

The SPIRE data also reveal dust emission from two clouds at the galaxy's outskirts, towards the lower-right and upper-left corners of the image. These clouds are part of a ring of gas and dust that surrounds the galaxy, but elsewhere in the ring, the dust is too tenuous to detect. In spite of the alignment between these components of the galaxy, it is unlikely that the jets are responsible for heating the dust in the clouds, as the dust would soon disintegrate under the intense power of the jet. Most likely, dust in both clouds is being heated by radiation from Centaurus A's old population of stars.

The Herschel data also show that the amount of gas and dust in the diffuse medium around Centaurus A is larger than in other elliptical galaxies. This effect can be explained as another legacy of the past merger that took place, between Centaurus A and a smaller galaxy with a richer content in gas and dust.