Composite image of Centaurus A - Herschel, XMM-Newton and ground-based telescope

Composite image of Centaurus A - Herschel, XMM-Newton and ground-based telescope 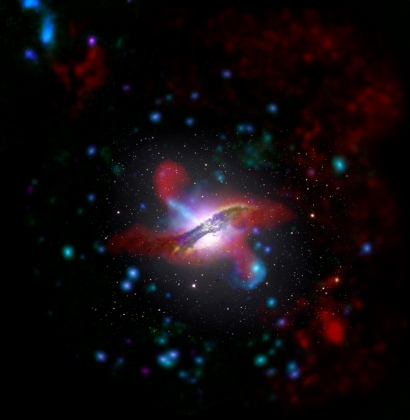 This image of Centaurus A is a composite, using data in four different wavebands: X-rays (shown in cyan, blue and purple, in order of increasing energy), far-infrared (shown in yellow), sub-millimetre (shown in red), and the visible waveband. The X-ray data was obtained with the EPIC camera on board ESA's XMM-Newton X-ray Observatory; the far-infrared and sub-millimetre data were obtained with the PACS instrument and SPIRE instrument, respectively, on board ESA's Herschel Space Observatory; the visible waveband image was obtained with the MPG/ESO 2.2-metre Telescope at La Silla Observatory, Chile.

At optical wavelengths, Centaurus A exhibits the morphology of an elliptical galaxy with a spheroidal halo of stars; in addition, a prominent dark lane appears to cross the halo at these wavelengths, as evident in the ground-based data. Observations in the infrared portion of the electromagnetic spectrum allow astronomers to peer through this obscuring lane and to reveal the structure of the galaxy's disc by detecting the glow of cold dust within it, as highlighted in the Herschel/PACS data.