Herschel image of Fomalhaut and its debris disc

Herschel image of Fomalhaut and its debris disc 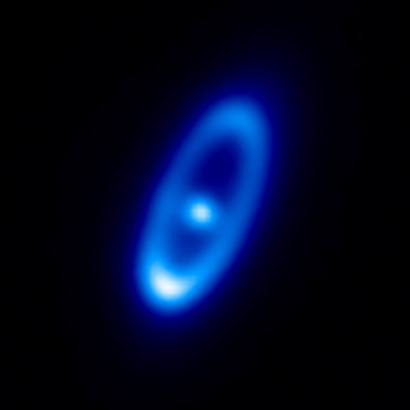 This image shows the thermal emission from the young star Fomalhaut and the debris disc surrounding it, as recorded with ESA's Herschel Space Observatory at a wavelength of 70 micron. Together with other data, this image suggests that the dust in Fomalhaut's debris disc consists of 'fluffy' aggregates: large conglomerates of small dust grains with lots of empty space in the structure.

The total mass of Fomalhaut's debris disc amounts to 110 times the mass of the Earth. This translates into a very large number of comets, ranging between 1011 and 1013, depending on their sizes. This is comparable to the mass of the primordial Kuiper Belt, which astronomers estimate to be of the order of 30 Earth masses.