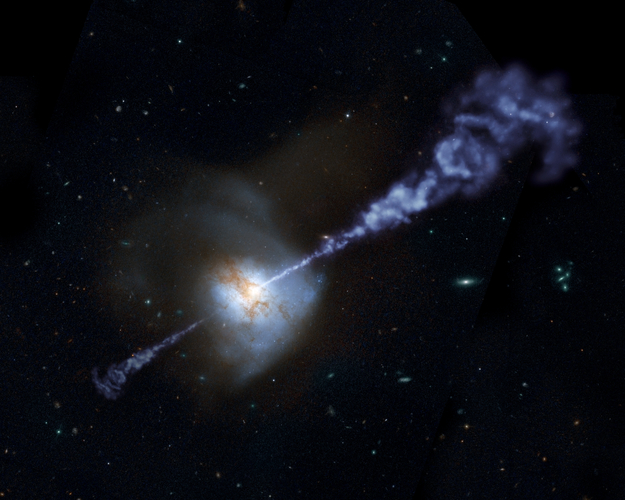 This illustration shows a galaxy in the early Universe that is releasing material via two symmetric outflows triggered by the supermassive black hole hosted at the centre of the galaxy.

During the first few billion years of the Universe's history, galaxies were producing stars at tremendous rates and the supermassive black holes at their centres were exceptionally active in accreting the surrounding matter. The accretion process onto a black hole, however, is not completely efficient and can thus drive large amounts of the galaxy's interstellar matter outwards. These black-hole triggered outflows could exert a negative feedback on their host galaxies, depriving them of the raw material needed to form stars. Eventually, this process could even lead to shutting off a galaxy's intense star formation activity.

Observations of a sample of galaxies at high redshifts, performed at far-infrared and sub-millimetre wavelengths with ESA's Herschel Space Observatory and in X-rays with NASA's Chandra X-ray Observatory, have demonstrated that the black hole's power is a crucial parameter in this context. The study shows that only the most powerful among black holes – those characterised by X-ray luminosity exceeding 1044 erg/s – are able to quench the star formation taking place in their host galaxies. This result has been published in a paper by Page et al., 2012.